The main purpose of cell signalling is to allow the activation or deactivation of genes which produce responses within the cell, generally so that they can respond to changes associated with the external or internal environment. For example, the increased uptake of glucose from the bloodstream stimulated by insulin or to activate cell division

When a stimulus is detected by a receptor, a message is transmitted from the receptor to an effector which carries out a response. 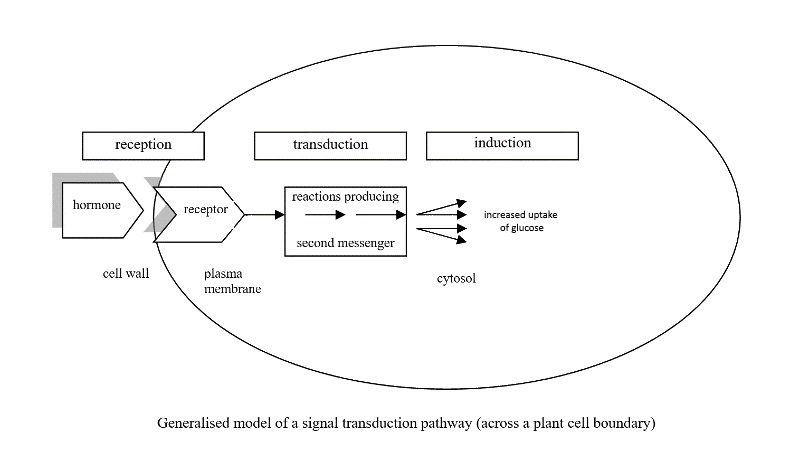 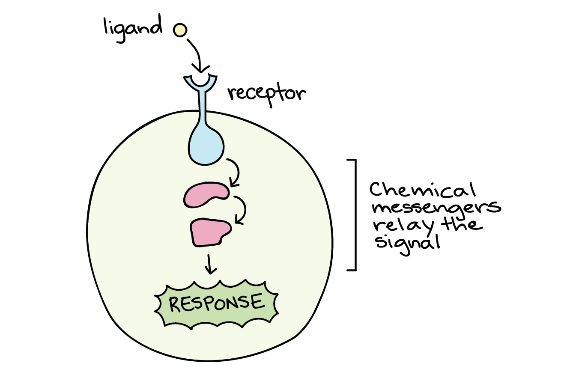 The binding sites of receptors are very specific; they will only bind to specific ligands preventing them from reacting to every signal encountered by the cell

Because hydrophobic signalling molecules can diffuse across the plasma membrane, they have their specific receptors in the cytosol or the nucleus. When they bind to their receptor, they form a receptor-ligand complex which moves from the cytosol into the nucleus where it attaches to a specific region on a chromosome thereby activating or deactivating a specific gene and increasing or decreasing protein synthesis. Therefore, they directly regulate gene expression. Some examples of hydrophobic signalling molecules include testosterone, estrogen, progesterone, thyroxine, cortisol and retinoic acid.

Because hydrophilic signalling molecules are incapable of diffusing across the plasma membrane, they bind to specific transmembrane receptors and are regarded as being the first messenger. When they bind to their receptor, they catalyse the production of secondary messengers which then produces a cascade. This is allows for the amplification of the signal and relays it into the nucleus, where specific genes are activated and the response carried out. Some examples of hydrophilic signalling molecules include ADH, insulin, glucagon, adrenaline, oxytocin and neurotransmitters.

There are three modes of transmission for signalling molecules that are required by the study design: autocrine, paracrine and endocrine.

Hormones are chemical messengers which are secreted by endocrine glands and regulate the rate of existing activities, usually through the induction or repression of enzymes within distant target cells via the endocrine system. They travel in the bloodstream, having slower, but longer lasting effect and are effective in small quantities. Hormones which are amino acid derived or peptide/protein are hydrophilic, while lipid derived/steroid hormones are hydrophobic.

Neurons use two types of signals

When a neuron is stimulated, it transmits a nerve impulse in the form of an electrical signal along its axon; at the axon terminals are vesicles which contain neurotransmitters. The neurotransmitters are released by the impulse from the pre-synaptic neuron via exocytosis and travel across the synaptic cleft and bind with receptors on the surface of the post-synaptic neuron. 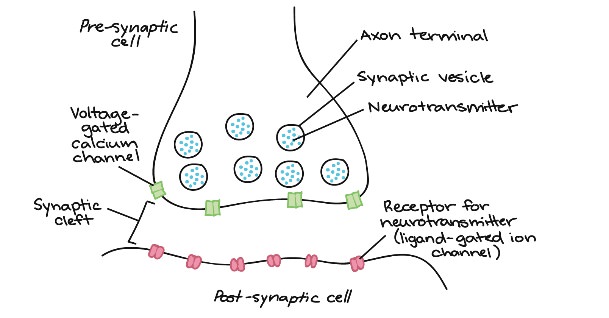 Pheromones are chemical signals released by one member of a species and carried to another member of the same species into the outside environment. Once the pheromone is received, the body physiology and behaviour of the organism can be affected. Pheromones include, alarm, territorial, aggregation, trail and sex

Cytokines are signalling molecules that are secreted from a variety of cells of the immune system which allow them to communicate with each other. For example, interferon secreted from viral-infected cells signalling other cells to prevent the virus from entering

Necrosis is unplanned cell death which occurs when a cell is damaged by mechanical or chemical trauma thereby causing changes to the plasma membrane. This causes the cell to burst as the plasma membrane can no longer function effectively and the cell contents leak into the extracellular fluid

Apoptosis is the systematic process that programs cell death in an orderly process. It plays a significant role in ensuring that a balance exists between cell production and cell loss. During apoptosis, special enzymes – lysozymes, package cell components into apoptotic bodies (blebs) which are engulfed by phagocytes. In apoptosis, cytokines produced by phagocytes protect surrounding cells by reducing inflammation and organelles may be recycled

When a cell is stressed by disease or serious damage, e.g. DNA damage or the malfunction of a crucial enzyme, proteins on the mitochondrial membrane are activated thereby disrupting the membrane and initiates a series of events. Pores open in the membrane of the mitochondria releasing Cytochrome C, activating caspases, enzymes which cleave DNA and protein.

This is generally the pathway adopted for excess cells, old cells or those selected by the immune system. When ligands from outside the cell binds to the death receptor located on the plasma membrane, a cascade of reactions occurs, activating caspases which dismantle the cell.