The plasma membrane is an integral component of all cells, effectively acting as a barrier between the intracellular and extracellular environments within an organism. It is composed from two layers of phospholipid molecules stacked on top of one another, forming a phospholipid bilayer.

Phospholipid molecules consist of one hydrophilic polar phosphate heads and two hydrophobic nonpolar fatty acid tails. For VCE Biology, it is acceptable to describe hydrophilic and polar substances as being those which are attracted towards water. Conversely, hydrophobic nonpolar substances are therefore those which are repelled by water. The tails face inwards, opposite one another, while the heads face outwards towards the watery extracellular and intracellular environments. This structure can be explained by the chemical composition of phospholipid molecules. Because the heads are hydrophilic, therefore they are attracted towards water, while the hydrophobic tails are repelled by water and instead are attracted towards one another and face inwards. Remember, water and fats do not mix together.

Roles of the Plasma Membrane

The plasma membrane serves many different functions, most of these however will not be entirely apparent to you until you progress through the course and learn the background information.

The Movement of Substances

The larger the molecule, the more difficult it is for it to cross the plasma membrane. This is directly attributed to the fact that it will struggle to pass through the tiny gaps between the phospholipid molecules. If the substance is polar, then it will be repelled by the nonpolar tails. Conversely, if the substance is nonpolar, then it can dissolve within the tails, allowing it to cross. Moreover, the more charged a substance is, then the more polar it becomes, and would therefore be repelled. Therefore, very small molecules and nonpolar (hydrophobic) molecules can directly cross the plasma membrane. For example, even though water is a polar substance, it is a very small molecule and thus, it can cross the plasma membrane through the gaps between phospholipid molecules. Other substances which can cross include O2, CO2, urea and steroids. Of course, however, cells are still able to transport larger molecules e.g. glucose into the cell, however these occur through other methods which are outlined below.

Passive transport is the movement of molecules across the plasma membrane without any additional energy, moving down their concentration gradient. This is further categorised into simple diffusion, osmosis and facilitated diffusion.

Facilitated diffusion is the passive net movement of molecules across the plasma membrane via protein channels or protein carriers from a region of high concentration to a region of low concentration. Channel proteins are transmembrane proteins which help create hydrophilic passages for polar, charged and hydrophilic substances e.g. glucose, potassium and sodium ions. 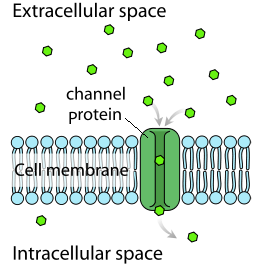 Active transport is the energy requiring movement of molecules across the plasma membrane generally from a region of low concentration to a region of high concentration via protein pumps. This process enables cells to dispose of unwanted substances and to take up nutrients even when the concentration outside the cell is very low.

Exocytosis is the energy dependent bulk transport of large molecules out of a cell through the formation of a vesicle within the cell, which fuses with the plasma membrane before the contents are secreted.

Endocytosis is the energy dependent bulk transport of large molecules into a cell through the formation of a vesicle from the plasma membrane. Phagocytosis is the term used for solids, while pinocytosis is used for fluids. 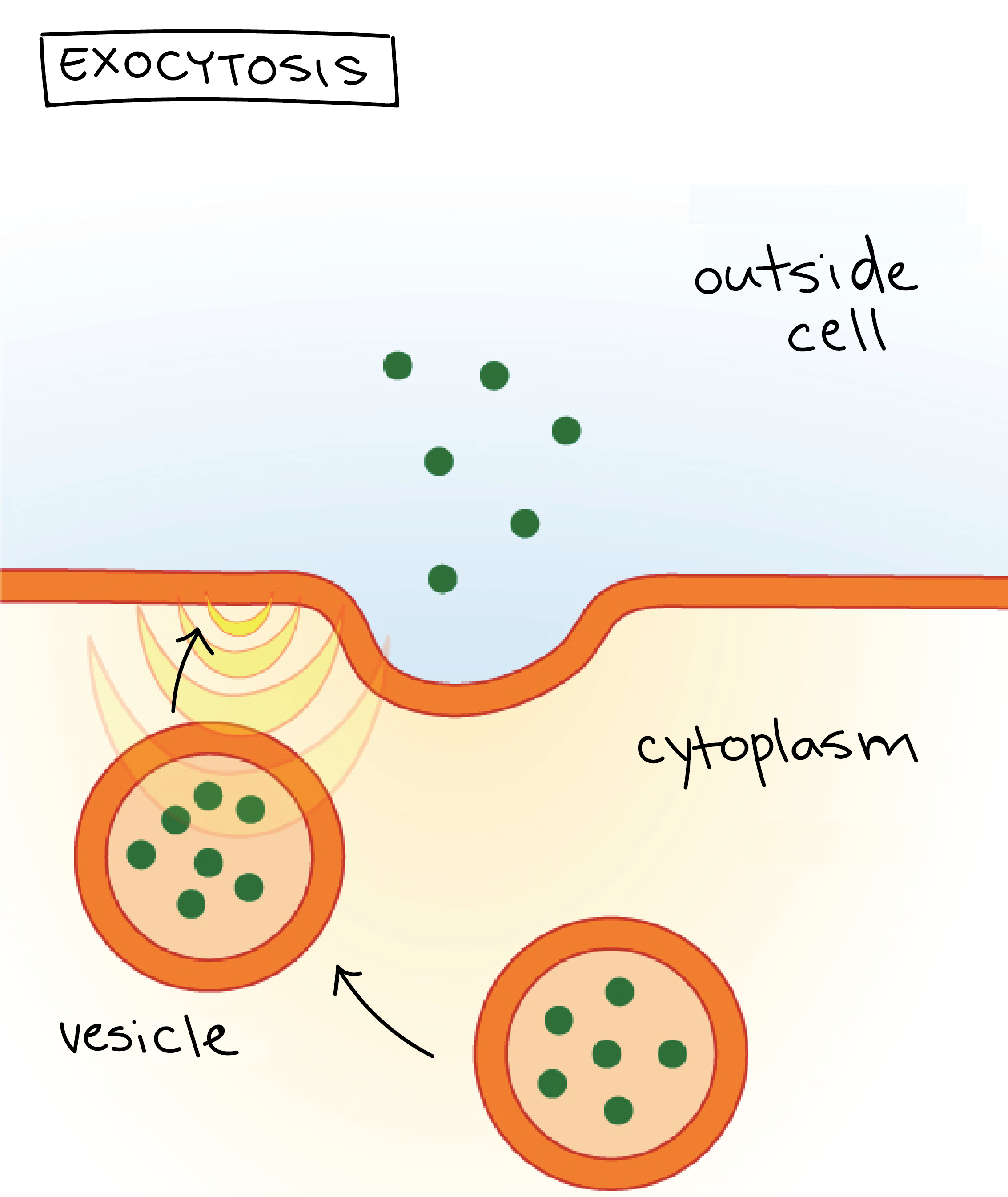 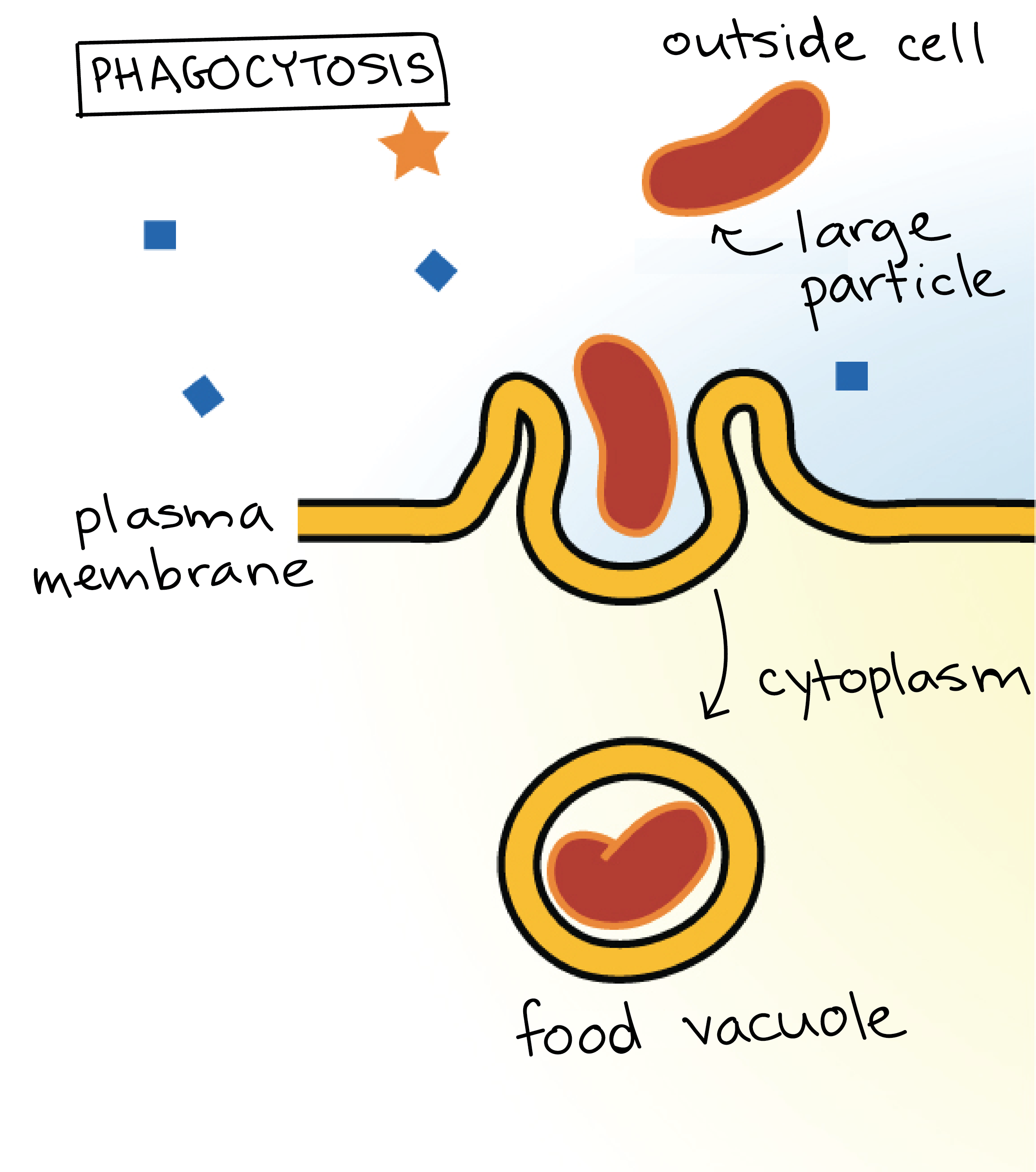