Our bodies are constantly under attack from pathogens, and therefore, we must be able to distinguish between self and non-self-antigens so that the immune system knows which cell to target.

This is made possible by the Major Histocompatibility Complex, which is a group of genes in vertebrates responsible for producing proteins that are expressed on the surface of the cells. All nucleated cells have MHC Class I markers and only antigen presenting cells have MHC Class II markers. These markers identify cells as being self and can present non-self-antigens to the immune system. Any molecule which triggers an immune response is an antigen e.g. cell surface proteins

Innate immunity or natural/passive immunity has the same reaction for any antigen, it is non-specific, comprises of physical, chemical and microbiological defences and has no memory of prior exposure

This is the innate cell mediated defence

Interferons are proteins that are released by viral affected cells that act on uninfected cells to increase their resistance to infection. They assist the immune response by inhibiting viral replication within other cells of the body by stimulating the production of antiviral proteins and warn nearby cells making them more resistant to infection

Complement proteins are inactive enzymes present in the plasma which are activated when they make direct contact with non-self-antigens. This starts a sequence of reactions that activates many complement proteins

They also promote inflammation, attract macrophages and neutrophils through chemotaxis and cluster and bind pathogens together through agglutination

The function of phagocytes is to engulf and destroy foreign pathogens and to engulf antigen-antibody complexes. In doing so, certain phagocytes can display the antigens of ingested pathogens on their MHC markers to T helper & Cytotoxic T cell

These are immune cells that specialise in presenting an antigen to a T-cell. The main types of professional APCs are dendritic cells, macrophages and B cells. APCs phagocytose a pathogen, take up the antigen, process it, and display it on both their MHC markers. Cytotoxic T cell cells interact with MHC Class I. T helper cells interact with MHC Class II

These are small glycoproteins which indicate the presences of potentially harmful invaders. They act as messengers between cells of the immune system and can promote the growth and proliferation of T lymphocytes, induce fever, promote antibody responses, activate macrophages and initiate or reduce inflammation.

Inflammation can occur when tissues are killed, damaged or burned. When damage occurs in a tissue, mast cells in the tissue secrete chemicals including histamine into the surrounding tissue fluid

Fever helps to inhibit the growth of some bacteria and viruses which are often temperature sensitive. It increases metabolic processes and the heart rate to allow the blood to deliver leukocytes to affected areas more rapidly.

Adaptive immunity is also called acquired immunity and produces cells and antibodies against specific antigens. It has memory and on re-exposure has a rapid response

The humoral response is active against non-self-antigens outside host cells, for example some bacteria, viral particles and free antigens

When antigen presenting cells phagocytose a pathogen, they present the foreign antigens on their MHC Class II markers and then migrate to the lymph nodes via the lymphatic vessels, where a corresponding naïve T helper cells use their receptors to recognise the presented antigens on the APCs. They are then regarded as selected (clonal selection). Meanwhile, free antigens will bind with specific naïve B-cells. They are then also regarded as being selected.

The plasma cells produce and secrete vast quantities of specific antibodies which flood into circulation. The memory cells retain memory of the antigen and specific antibody and can respond quickly and strongly to any subsequent experience of the same antigen

The cell mediated response is active against non-self-antigens located inside cells for example viruses, cancer cells and transplant tissue.

Antibodies do not directly destroy pathogens but defend against infectious pathogens and toxins by binding to pathogens. They block their receptors so that the pathogens cannot infect other healthy cells and bind to pathogens tagging them for destruction (Agglutination). Immunity involving antibodies circulating in in the body is called humoral immunity. Each antibody is specific for one antigen only due to the antigen binding site of the antibody molecule being complementary in shape for the antigen 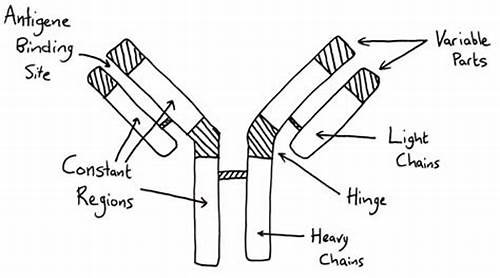 After natural exposure or vaccination, T helper cells initiate the response and the presence of memory cells results in a much faster response. Antibodies are produced faster and in large quantities. Secondary response occurs within hours while primary takes days