Variation can arise due to mutations, polygenic inheritance, recombination and environmental factors

Genetic drift is the change in allele frequency overtime, caused by unpredictable random events. The potential impact is greater in smaller populations. In genetic drift, no allele is favoured; they are all equally subject to being affected. In small populations, this can lead to the decrease of favourable alleles, and eventual extinct.

The bottleneck effect is when the size of a population is both randomly and drastically reduced, resulting from major disasters such as natural disasters. The gene pool is thus limited to the few survivors and the generations thereafter may have different allele frequencies and the genetic diversity may be greatly reduced

The founder effect is when a small, non-representative sample of a larger population branches off to start a new colony. Thus, the gene pool is likely to have reduced genetic variation and is more subject to genetic drift 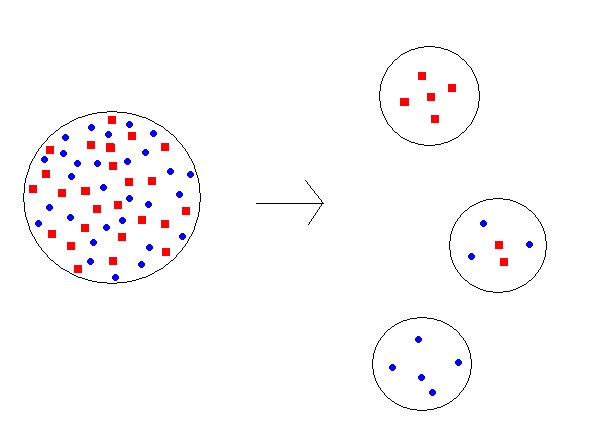 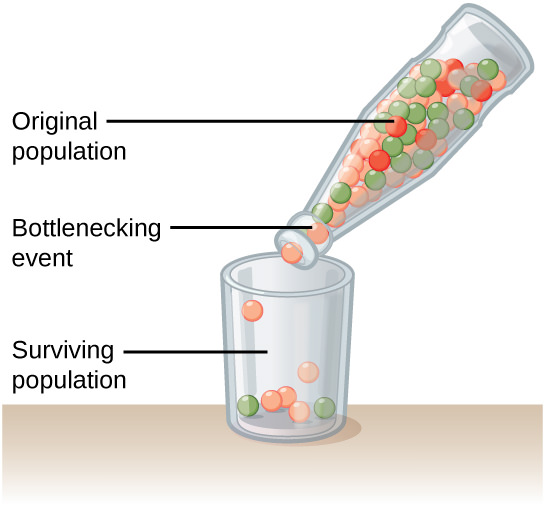 Antigenic Drift is point mutations in the genes coding for Haemagglutinin and Neuraminidase (both are glycoproteins on the surface of the Influenza virus) result in slightly different expressions of these antigens. They are slow, meandering, drifting change over time, meaning by the time a year has passed the present strains are quite different.

Antigenic Shift is the combination of multiple strains present in the cell, resulting in a totally different being created. Pigs are the ‘mixing vessels’ of flu strains, as they can be infected by human flu strains, swine flu strains as well as avian flu strains. This process often results in endemic infections eg. Spanish flu, Asian flu.

Natural selection occurs when a selective pressure confers a selective advantage upon certain phenotypes in a population in an environment, affecting their survival and reproductive rates.

Speciation is the formation of a new species. For sexually reproducing organisms, a new species is formed with they are not able to interbreed under natural conditions, or, if they do interbreed, are unable to produce viable offspring, or if they survive, are sterile.

Allopatric Speciation is where speciation occurs under circumstances where a population of a species becomes geographically isolated, resulting in no gene flow between them and other populations. By being geographically isolated they may experience different selective pressures, resulting in changes in their gene pool and allele frequencies, thus, allowing for the differences between the two populations to accumulate.

Sympatric speciation relies on INTRINSIC ISOLATING MECHANISMS which is divided into two broad categories: Premating and Postmating. In sympatric speciation, there is NO physical / geographical barrier separating fragmented populations. Within the same environment different selective pressures act on the population.

Sympatric speciation can also occur as the result of reproductive isolation of two populations as a result of genetic abnormalities. Nondisjunction events result in polyploidy (extra sets of chromosomes, such as 4n, 6n, 8n) organisms that can no longer interbreed with similar organisms that did not inherit the extra chromosomes. If the polyploid organism can have fertile and viable offspring then it is a new species. Sympatric speciation occurs more commonly in plants, due to their capacity for self-fertilisation.

For the Lord Howe Palm, differences in soil pH were the most significant factor for sympatric speciation. Different selective pressures enacted among them as Howea belmoreana inhabits neutral and acidic soils while Howea forsteriana inhabits calcarenite regions with alkaline soil. Temporal pre-mating isolation mechanism was at play here- differences in flowering times so they can’t fertilise each other and have gene flow.

Selective breeding or artificial selection is the deliberate human intervention of selecting parents with beneficial phenotypic characteristics to reproduce. In doing so, breeders manipulate the gene pool of their breeding stock, and maintain features in a population that are economically important or aesthetically appealing. This simply allows for traits that are already present to become more common, it does not create new traits. Therefore, it reduces the genetic diversity and decreases the ability to withstand environmental changes

Artificial insemination involves the collecting of semen from a selected animal and then introducing it by artificial means into the reproductive tract of females. Sex selection through sperm sorting is the process of producing offspring predominately of one sex by artificially separating sperm into those with X and those with Y chromosomes